You are here: Home1 / Blog2 / Auto Aftermarket News & Trends3 / Why Was This Recession Different? It Was the Double-Dip In Auto Parts ...

When looking at the auto parts retail segment of the economy, the Great Recession not only lasted longer than previous recessions, but our market research shows auto parts retail sales also had a double-dip. For all the talk in the news media earlier this year whether the recent recession would fall into a double-dip recession, the automotive aftermarket already had one.* And ironically sales for the aftermarket went into negative territory June 2009, when the current recession is now officially defined as ended. Confused? Read on.

The start of the Great Recession and the auto industry

From December 2007 (the start of the Great Recession) to November 2008, the cumulative change 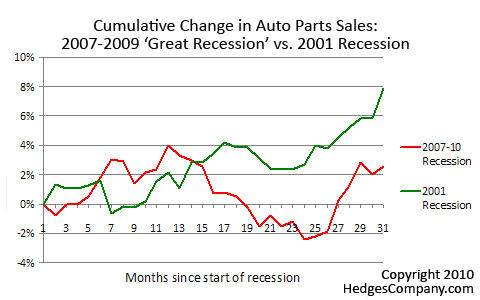 in auto parts retail sales increased 4% (red line) while the rest of the economy was withering. However a second dip started December 2008 (month 13 on the chart) and bottomed November 2009 (month 24 on the chart) resulting in a more than a six-point cumulative decrease in retail sales from the November 2008 peak. As a point of reference the Great Recession officially ended June, 2009 which is month 19 on the chart.

This is a dramatic difference from the 2001 recession (green line). The 2001 recession, starting March 2001, had momentary setbacks but after 30 months the industry had grown a cumulative 8%. In the same time frame, the 2007 recession has only rebounded 2.6%.

It’s the relative weakness of the economy, and the second dip that made this recession feel different in the automotive aftermarket. By late 2008 a recovery seemed to be underway, only to have the bottom drop out again for the next 12 months. The roller coaster ride of the Great Recession made everyone queasy and looking for the nearest exit. Previous recessions were no picnic, but the steady upward trend they had allowed everyone to feel the worst was over. Bottom line: As of June 2010 (red line, month 31 on the chart) sales of auto parts are up nearly 3% since the beginning of the Great Recession. By contrast, September 2003, 31 months after the start of the 2001 recession (green line) showed retail sales of auto parts up 8%.

*To be technically correct, a recession is defined as a decline in GDP or diminishing economic activity, not in sales dollars in a segment of an economy.