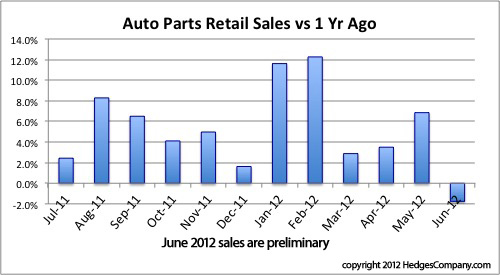 Today we look at the aftermarket trend of retail sales of auto parts and accessories for the first half of 2012. Our preliminary 2011 forecast put the entire industry up 4.5% over 2010 and it came in at 5%. Here are two things you should know about 2012:

1). 2012 started very strong with most retailers, with unseasonably warm weather pulling sales into January and February. One exception came from businesses that depend on winter repairs: a warm winter and spring didn’t help sales of repair shops or auto batteries, for example. Right now it’s too soon to tell if 2012 will beat last year’s 5% increase. The way it looks right now we’ll probably come in a little less than that.

2). January through May, 2012, had a 7+% YTD increase in brick and mortar retail sales for parts and accessories. In June things slowed down and it was the first month of 2012 that didn’t show an increase over 2011. Retail sales were down nearly 2% from June 2011. It should be noted, however, that one year ago June was a big month that enjoyed a huge increase over June 2010 so it’s a tough month to beat this year.

We’ll continue to watch whether June 2012 is the start of a new trend or a small speed bump. What have you seen? Was June soft for you?

It’s Monday, August 27 and 64 days until the SEMA Show and AAPEX. Thanks for reading our 66 Trends in 66 Days and we’ll see you in Las Vegas.

Come back tomorrow and read our next trend, the role social media plays in the automotive parts and accessories buying process.