You are here: Home1 / Blog2 / Auto Aftermarket News & Trends3 / How will 2011 be for the Automotive Aftermarket Industry?

Not only did the Hedges & Company Automotive Aftermarket Index outperform the S&P, but aside from a slight blip in June and July, the rise was steady and constant. Compared to the 2008 baseline (gray line in chart), 2010 was clearly a breakout year. The index bounced around the baseline for 2008 and 2009, but by late summer 2010, the index was 34% ahead of the baseline and didn’t look back. 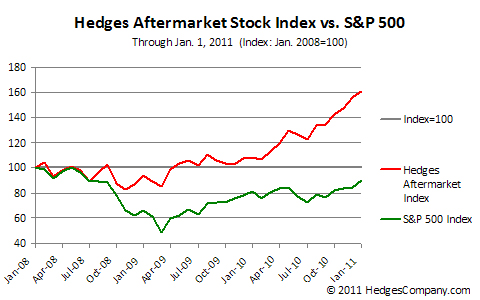 Clearly the automotive aftermarket industry is strong, healthy and poised to have a great 2011.

Financial disclaimer: Hedges & Company is not attempting to give any financial advice; investments are subject to risk; carefully review and consider a prospectus before making any investment decisions. Full disclosure: Hedges & Company principals do not directly own stock in any of the companies listed.