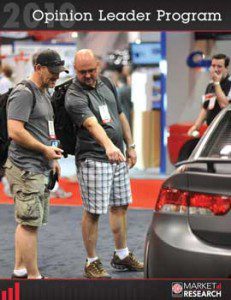 This is important market research for aftermarket companies. The feedback from the Opinion Leaders SEMA market research program is a big opportunity to better understand the buying process used by automotive enthusiasts.

As with the previous year, Opinion Leaders Program participants got into the SEMA Show. These enthusiasts completed a detailed survey to share their opinions and buying habits. They shared impressions from the SEMA Show through social media using their personal account or their car club affiliation.

An important conclusion from the report: Almost universally enthusiasts associate “performance” with “an improvement in function” and not necessarily with “speed.”

In the report, one motorsports enthusiast explained his personal buying process like this. “I tend to go by word of mouth. If a company is ‘making waves’ with a part, that’s the one I tend to look at first. Name brands kind of get stuck in a mindset and do things the same way they’ve been done for 20 years. New companies come along and they come at it a completely different way, and it ends up working better. So whoever is ‘making waves,’ that’s the first place I go.”

The Opinion Leaders report shows that 83% of these enthusiasts use Internet searches, such as Google, to find information on parts and accessories for their vehicle. 79% said they purchased at least one part on the Internet.

As one focus group enthusiast put it: “The Internet is your friend.”

Many of these enthusiasts are active on Facebook and Twitter. It’s important to note social media did not play a significant role in the decision-making process to purchase aftermarket parts.

The report revealed these enthusiasts spend a significant amount of time and money on their hobby. Over a third reported spending over $5,000 per year. About 85% purchase parts and accessories for more than one vehicle.

“The information that we gathered from the Opinion Leaders Program will give SEMA-member companies a better understanding of their end users, which will help them make better-informed business decisions,” said Tom Myroniak, SEMA vice president of marketing and member services.

The 89-page market research report was made available at no cost to SEMA Show exhibitors, as well as SEMA-member companies.