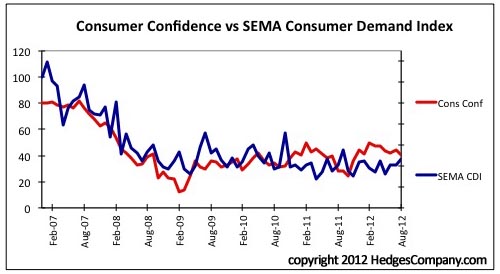 Today here’s a look at the August 2012 SEMA Consumer Demand Index (blue line) compared to consumer confidence (red line). And by the way, the 2012 SEMA Show is in just 58 days!

The Consumer Demand Index (CDI) measures purchase intentions of both enthusiast and mainstream automotive consumers for the next three months. It is a weighted composite index set to an initial value of 100 back in January 2007. Today, we take the SEMA CDI and compare it to another widely-used index of consumer confidence.

The two track together fairly well; the SEMA CDI drops with the economy through 2007 and 2008 as does consumer confidence, and although there are brief peaks and valleys both have fluctuated

in a fairly narrow range together.

The SEMA CDI improved from the last half of 2011 through most of 2012. It sat at 33 in June and July and went up to 37 in August. Nationwide, consumer confidence recently dropped to the lowest point since November 2011 so we need to watch how the two trend through the rest of 2012. (Note: consumer confidence is sometimes mixed up with the Consumer Sentiment Index compiled by the University of Michigan Institute for Social Research. They’re actually two different indices.)

You might be taking tomorrow off for Labor Day, but we’re in the office diligently crunching market research data. If you’re not outside enjoying the end of summer, check tomorrow in as we look at Trend 57: Buying Behavior of Camshaft Shoppers and Buyers.

Product Data Questions Answered: ACES and PIES Data, Is There An Auto Parts...