What state has the most Jeep vehicles? What is the Jeep Wrangler target market?

The state with the most may surprise you. 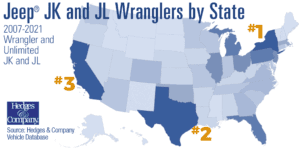 CLICK TO ENLARGE: The state with the most 2007-2021 Wrangler JK, JKU, JL and JLU Jeep vehicles may surprise you. It’s New York.

The states with the most JK, JKU, JL and JLU Wranglers are New York, followed by Texas, California, Michigan and Pennsylvania.

If you look at total Wranglers including the 1987-1995 YJ and the 1997-2006 TJ, the top states for Jeep Wranglers are less of a surprise. Number one is California, followed by Texas, New York, Pennsylvania and Florida.

The states with the least amount of Wranglers per capita start with Mississippi, followed by California, Washington D.C., Tennessee and Alabama. 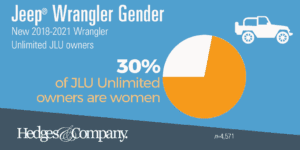 Next, we looked at gender to find out what kind of person drives a Jeep Wrangler. If you’ve spent time looking for this on the internet you already know this is a topic of a lot of debate. Some people share an opinion that the Jeep Wrangler is mostly owned by women. There are a lot of searches on Google for “women in Jeeps” and “Jeep women,” too. 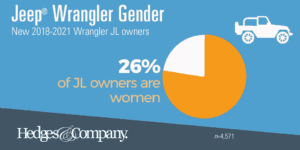 It changes a bit when you remove the Wrangler Unlimited from the equation. 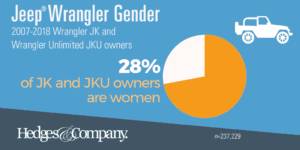 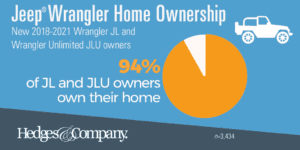 CLICK TO ENLARGE: 94% of Jeep JL and JLU owners also own their home.

What kind of person drives a Jeep Wrangler? A lot of home owners. Most Jeep Wrangler owners own their own home. We found that only 6% of new 2018-2021 JL and JLU owners don’t own their home, while 94% are home owners. The home of JL owners have an average value of about $200,000.

Keep in mind that home values can vary significantly from state to state, from an average of $107,064 in West Virginia (lowest in the US) up to $579, 332 in California (highest). It’s almost misleading to even cite an average home value but we wanted to include it with other our Jeep owner demographics.

The percentage of Americans who own their home has ranged between about 64% to 67% in recent years, so Wrangler owners are significantly higher than the US average. 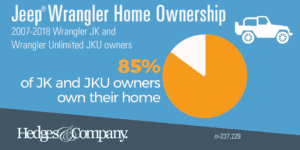 Average home values for new JK and JKU owners are about the same as JL and JLU owners. In both cases, 4-door Unlimited owners have slightly more expensive homes at around $210,000.

Jeep Wrangler owners tend to be a younger demographic.

Here are the average age groups for new 2018-2023 Jeep JLU owners, 96% of whom have children in the home. This explains in part why are Jeeps so popular. The 4 doors make it easier for families to get in and out. Notice the 4-door Wrangler Unlimited has a higher percentage of children in the home than the 2-door body style, and has a much younger demographic. It appears the JLU Jeep target market here is young families with children.

Here are the average age groups for 2007-2018 Jeep JKU owners, 94% of whom have children in the home. Here again the 4-door Wrangler Unlimited has a higher percentage of children in the home than the 2-door Wrangler and a significantly younger demographic. As with the JLU above, this explains in part why are Jeeps so popular. Here again, the JKU Jeep target market looks like it was young families with children.

This data comes from the master vehicle owner database of 175+ million car and truck owners, which includes large amounts of consumer-level data. This is then added onto vehicle records. This provides a high level of accuracy when we analyze Jeep demographics data. It avoids survey errors from self-reported data or other types of “sampling errors.” Most of the statistics cited on this Jeep owner demographics analysis have a margin of error of +/-2.5% at a 95% confidence level.

This article is copyrighted, but it’s polite to share! This content is licensed under a Creative Commons Attribution-ShareAlike 3.0 Unported License and can be distributed or quoted, with attribution and a link given to Hedges & Company. Please also be advised that Jeep® is a registered trademark of Chrysler Group, LLC and that this article is being freely shared as a non-commercial public service. Chrysler Group, LLC is owned by Dutch automotive conglomerate Stellantis N.V.

Focus on Audience Buying and Planning for Better Digital ROI