What’s the coronavirus impact on the auto aftermarket?

What is the COVID-19 and coronavirus impact on the auto aftermarket? Most economists seem to agree right now that we’re probably heading into a recession. (This is written March 27, 2020.) And it makes perfect sense that if people are unemployed and the economy is shut down, a recession is likely. We can’t predict the future but there are five things we do know:

1. The automotive aftermarket is historically recession-resistant.
2. Coronavirus and COVID-19 concerns are driving more people online.
3. If consumers don’t buy new cars, their old cars need more parts.
4. The aftermarket and the car hobby are driven by passion.
5. For better or worse, we can’t spend money on dining out, movies or sporting events.

First, let’s look at data from the last recession: 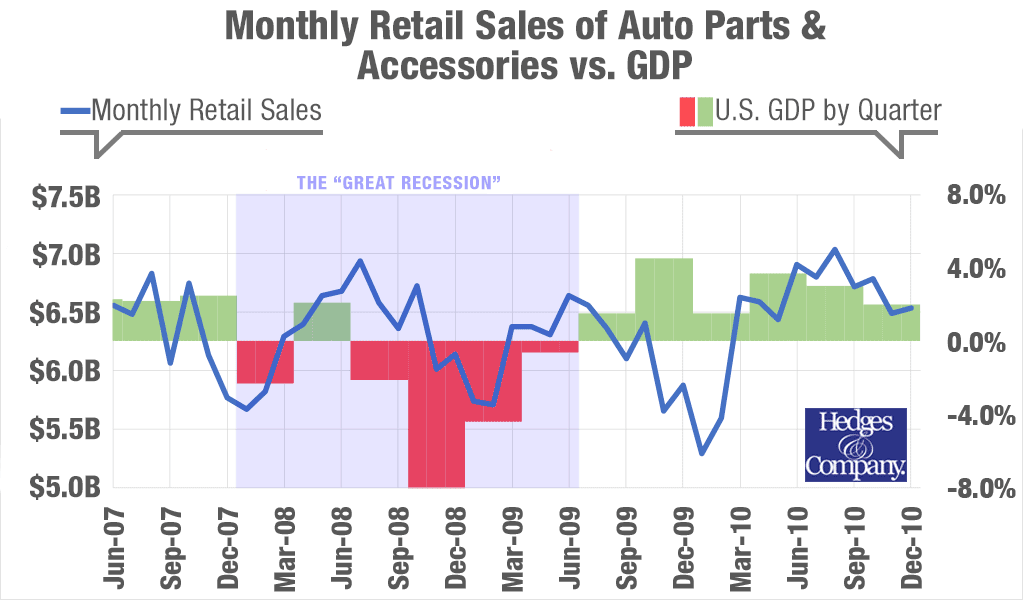 The COVID-19 and coronavirus impact on the auto aftermarket might be similar to 2007-2009. (Some call the shutdown the “Great Cessation.”) This first graph compares monthly retail sales through auto parts and tire stores (NAICS 4413), shown on the left scale. GDP by quarter is shown with the red or green bars, using the right scale. 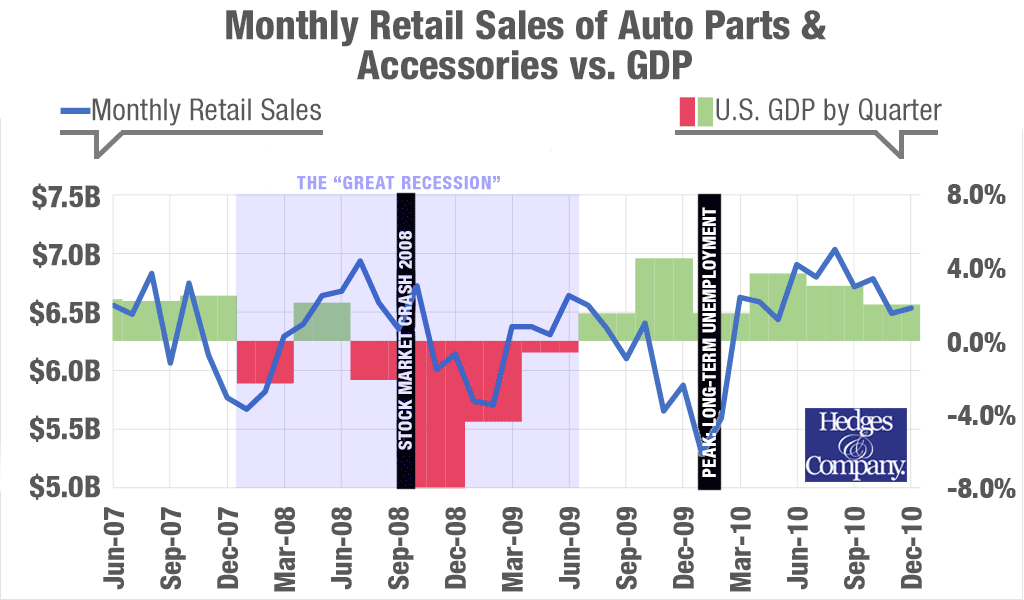 Retail sales dipped 6 months after the Great Recession was over

Monthly sales for auto parts typically peak in summer and fall, and dip in the winter. The first chart shows normal peaks and dips in 2007-2008. There’s a big dip in January 2010, so what caused that?

This next chart shows the same data but we added two major events. The black bars show the big stock market crash in September 2008 and an all-time record for long-term (6 months or more) unemployment. Note that overall unemployment rate didn’t affect retail sales (it was 10% in 2009), it was a spike in the long-term unemployment rate in January 2010. It’s also really interesting that this was six months after the official end of the Great Recession.

Consumer confidence in the economy was actually trending up significantly in 2009, into 2010.

How did the aftermarket do in the 2001 recession? 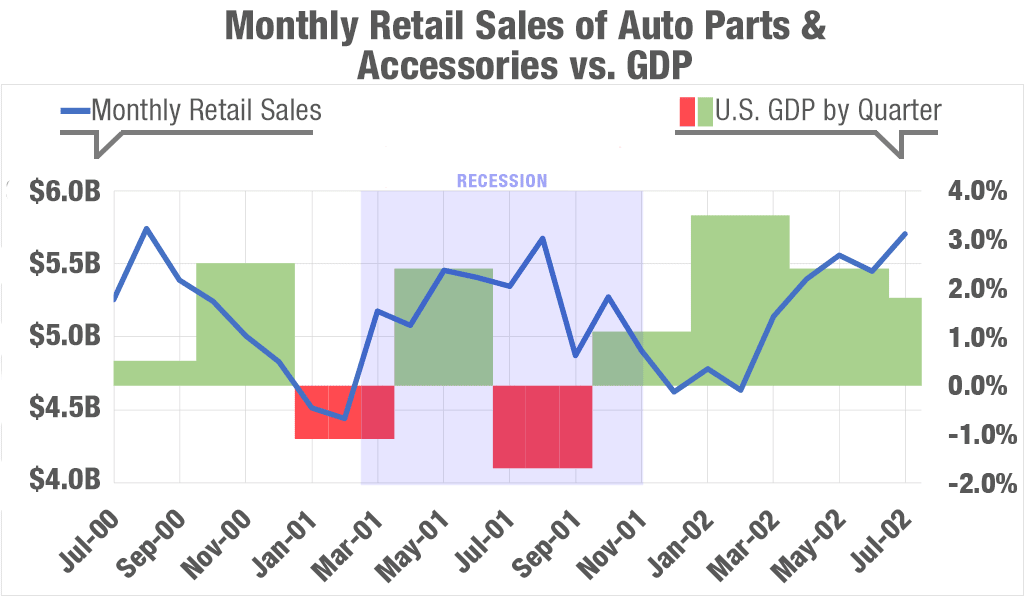 The 2001 recession was milder than the Great Recession. Comparisons to COVID-19 and coronavirus impact on the auto aftermarket are tougher.

And of course, September 2001 had the 9/11 terrorist attack, and the stock market crash seven days later. At the time it was the biggest one-day crash in history. The Dow Jones average dropped 684.81 points or -7.1%.

The recession lasted nine months. Retail sales of auto parts, accessories and tires were up over the previous year in 3 out of those months.

Is there any good news? What else should we know? 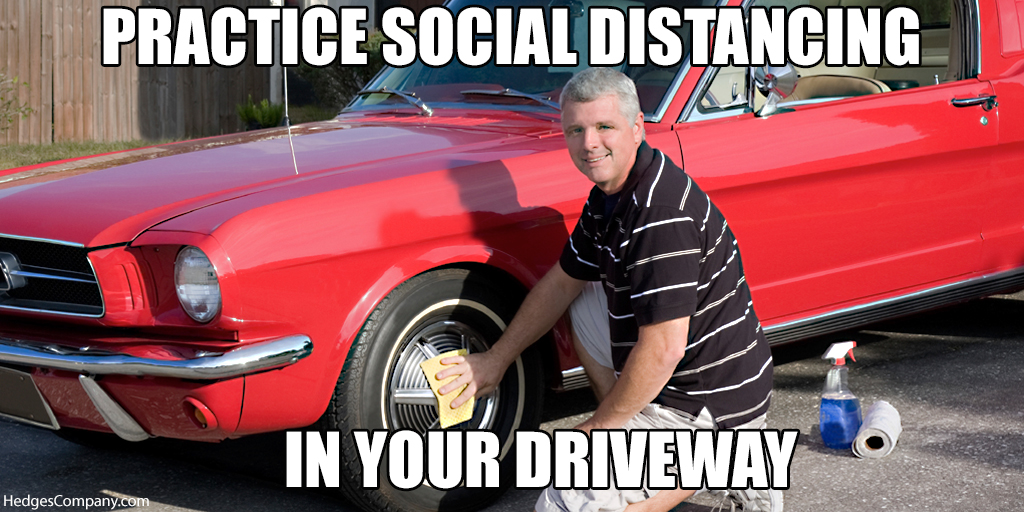 The key point to keep in mind is the first thing we noted at the top. The automotive aftermarket is traditionally recession-resistant. Cars need parts. Enthusiasts want parts and accessories. A garage or driveway is a great place for a DIYer to practice social distancing. This is good news.

One thing significantly different in 2020 vs. 2007 is that banks today have a lot of liquidity. In the Great Recession banks and financial institutions were strapped for cash. That’s good news.

A huge spike in oil prices in 2007-2008 contributed to the Great Recession. We don’t have that problem in the economy right now. That’s probably good news.

COVID-19 fears are driving more consumers to online shopping. That will drive eCommerce up in 2020, exceeding previous forecasts. Consumers are avoiding crowds and they’re not leaving their home as much. That’s not good for brick & mortar auto parts or tire stores. Good news for eCommerce auto parts stores. 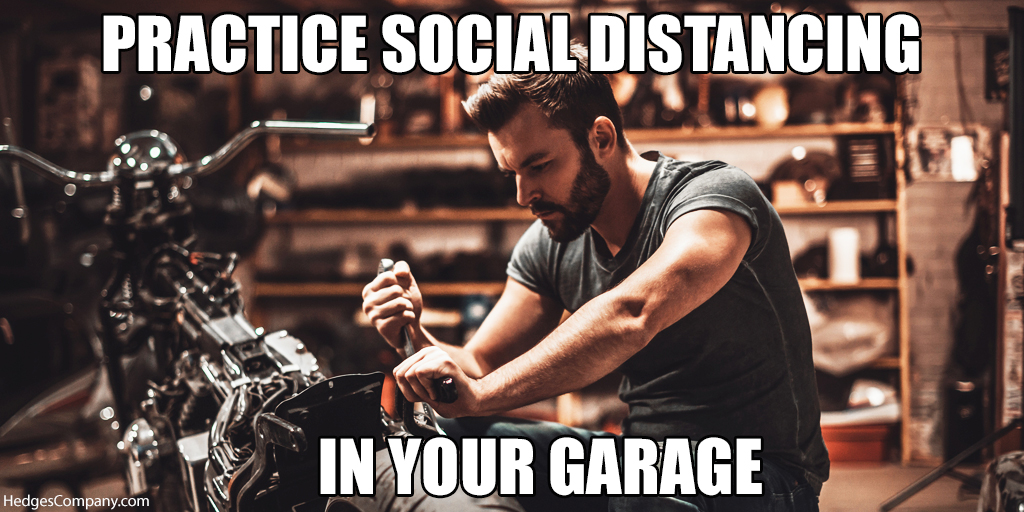 Millennials are slightly more concerned about coronavirus than the rest of the population. At least for now. Neither good or bad news.

Congress is allocating $2 Trillion to stimulate the economy, that certainly helps. You can hear a podcast about it on the Wall Street Journal website. That’s good news.

Methodology used in this analysis