You are here: Home1 / Blog2 / Auto Aftermarket News & Trends3 / What Is The Most Popular Truck in America

What is the most popular truck in America? We have all the best-selling full-size trucks right here: 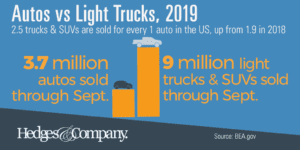 CLICK TO ENLARGE: Light trucks are more popular than cars and outsell them about 2:1. The best-selling truck in America is the Ford F-series.

*Note that the definition of a “light truck” is defined by GVWR classes and includes pickups, SUVs, CUVs and even some station wagons.

Best selling truck of all time

Ford F-Series trucks have also been the most popular vehicle including cars in the US, not just most popular truck, for nearly 40 years.

The first F-series, the Ford F1, was introduced way back in January, 1948, about 75 years ago. Although popular in post-war America, it took 29 years to move to the top of the best selling full size trucks list. It has been there ever since.

The second generation appeared as a 1953 model with the Ford F-100 replacing the F-1.

Ford announced the new all-electric F-150 Lightning on May 20, 2021. It went on sale as a 2022 model year truck. With Ford Intelligent Backup Power, and enough power to run your home in a blackout for up to 10 days, the new electric F-150 will probably help extend the F-150’s reign in the future. It also has a 9.6 kW option to run power tools and other accessories, using eleven 120 volt and 240 volt outlets.

In 2019 for every new automobile sold, 2.5 new light trucks were sold.

If you ask what is the best selling truck in America, it seems like they all are!

You can see in the chart the Ford F-series pickups continue their traditional dominance as the most popular pickup truck in the US.

Any list of most popular trucks has to start with the Ford F-150. 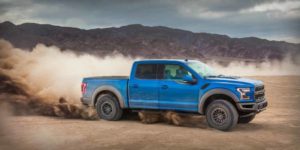 The list continues with Chevy Silverado’s sister pickup, the GMC Sierra, at number four. Then you have the Toyota Tundra (#5), Honda Ridgeline (#6) and Nissan Titan and Titan XD (#6).

America’s favorite truck is going electric, too. Ford has announced a new all-electric version of the F-150 and a hybrid version is available as a 2021 model. This hybrid F-150 has a twin turbo EcoBoost 3.5L V6 engine called the “PowerBoost.” This is coupled with a 10-speed auto transmission with an embedded electric motor. With the combined gasoline engine and electric with a full charge the PowerBoost has 430 horsepower and 570 lb.-ft. of torque.

The most popular fuel for full-size pickup trucks is gasoline or flex fuel. Diesel fuel is used in the heavy-duty versions of these trucks and ranges from 12% of all trucks sold (Chevy Silverado) to high-teens (GMC Sierra and Ford F-Series) to 20% (Ram and Nissan).

Most popular truck in America: mid-size

In the mid-size pickup category, you can see how Toyota dominates. It easily outsells the second most popular mid-size truck, the Ford Ranger. The Chevy Colorado used to be at #2 but in 2021 is projected to fall to #4.

The new Jeep® Gladiator truck came in at #6 and first shipped in April 2019. The Gladiator started out as a 2020 model year and is now the third most popular mid-size truck. 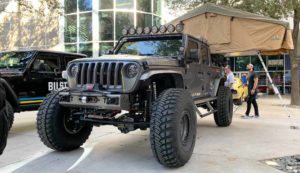 The Nissan Frontier has fallen from third to fifth place.

Keep your eye on the Jeep® Gladiator mid-size pickup (also known as the Jeep JT). It resembles a Jeep Wrangler JLU Unlimited with a pickup bed attached. It started shipping in May 2019. Is is a 2020 model and is already very popular.

The Gladiator only sold 18,000 units in 2019. Unit sales have steadily grown and the Gladiator could threaten the Ford Ranger’s position in 2022, especially with incentives offered by FCA. The Gladiator is also very versatile if you want to go off-road or just look the part.

You may also be interested in our latest article on Jeep® owner demographics.

When is the Tesla Cybertruck coming out? 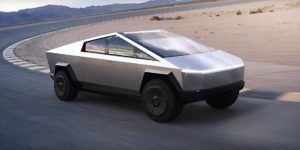 The Cybertruck had a lot of publicity around its November 2019 unveiling. At one time it was the most discussed truck in America.

It certainly stands out with a unique profile and all-electric drivetrain. With the optional Tri Motor AWD version you get acceleration from zero t0 60 mph in 2.9 seconds. And you get 7,500 lbs. towing capacity.

We cover Ford, Ram, Chevrolet, GMC, Jeep, Honda, Nissan and Toyota in this article. One pickup truck brand not included is Jiangling, a pickup truck brand in Asia manufactured in China and commonly called JMC. Jiangling pickup trucks include the Baodian and Yuhu. Another brand not included is Great Wall, another Asian pickup brand manufactured in China. Great Wall manufactured the Wingle 3, replaced by the Wingle 5 and Wingle 6 (also sold in the UK as the Great Wall Steed). Another brand is Mitsubishi, manufacturer of the Triton pickup (also known as the L200 in most markets around the world, as well as the Mitsubishi Strada and Fiat Fullback).