Curious about Tesla owner demographics, including Model S and Model X owners? Read on! (By the way, here’s the link if you’re looking for demographics on the Tesla Model 3).

As a comparison, the median household income in the United States in 2020 was $67,621. (Full disclosure, we’re comparing two different things. If you’re confused about “average income“ vs. “median income” just look here.) 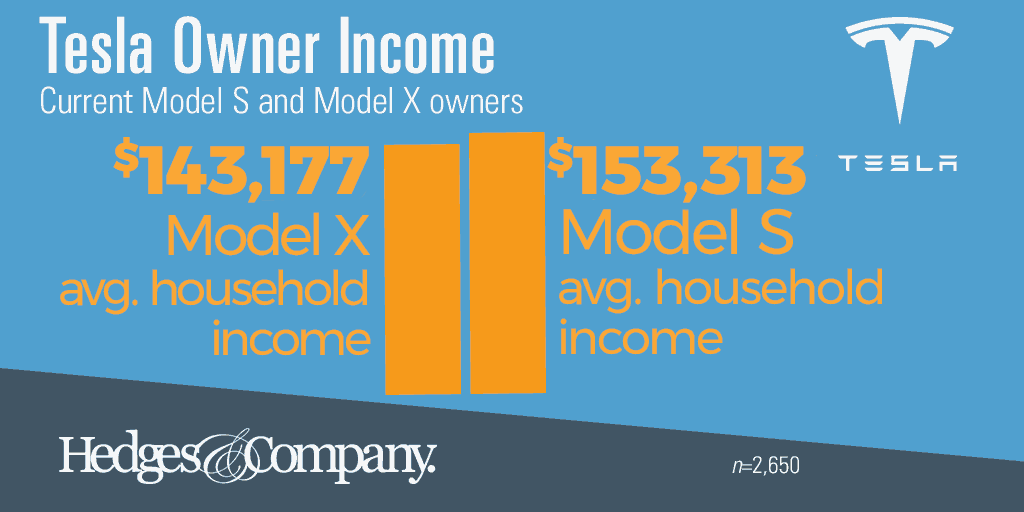 There are other online sources of Tesla owner demographics including this one at market research company Quantcast that reports owners have income over $100K. There’s also this survey from Teslarati that puts Model X and Model S owner income significantly higher.

Note that geography matters with vehicle ownership and “average household income.” The average luxury car owner has an average income of around $100,000 (2014), but many Tesla owners are in California where the cost of living is higher than average. When Kantar Media TGI studied luxury car owners for the New York Times, the average income was about $100,000, but that average ranged from $83,891 to $155,548, by state!

This updated data for 2022 is pulled from a random universe of 5,935 Tesla owners. The statistics we’re reporting here have a margin of error of +/-2.4%. 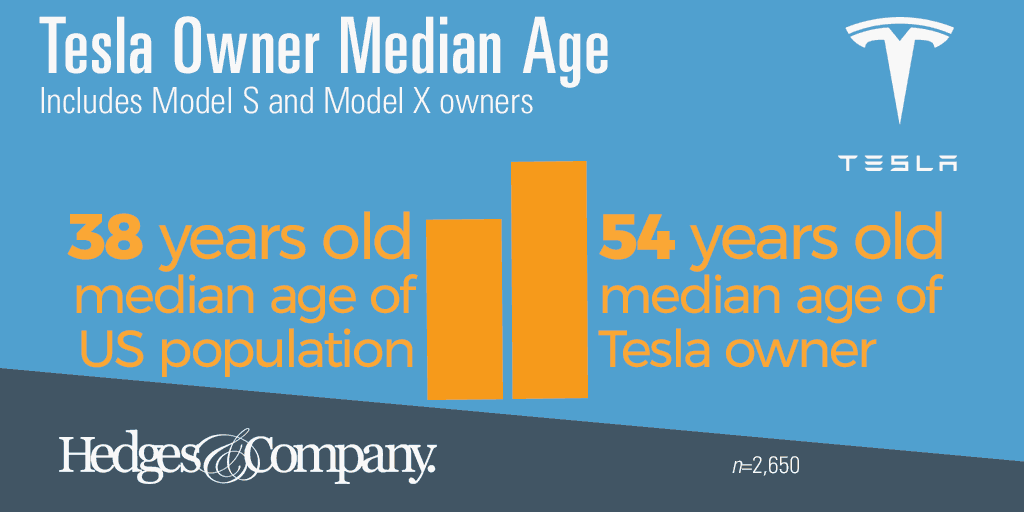 Tesla owners are an older demographic.

Our data shows that the median age of a Tesla Model S and Model X owner is just under 54 years old, compared to 38 for the US population.

These numbers line right up with the Teslarati survey. Our margin of error is +/-2.5%. 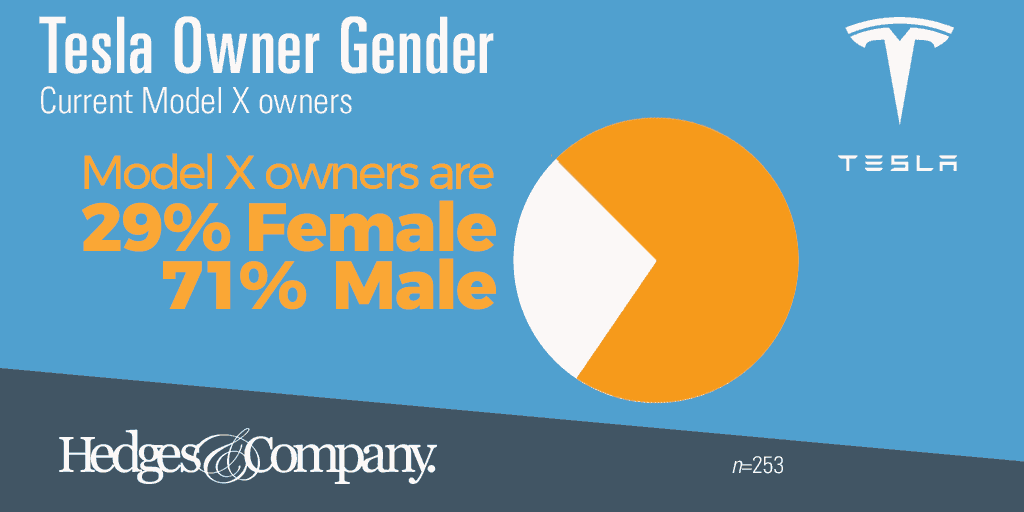 We looked at the gender of current Tesla owners, including Tesla Model S and Tesla Model X.

Owners of the Model X have a higher percentage of women owners. Women own 29% of Model X vehicles and men own 71%. The Model X is a gull-wing SUV (according to Tesla) or CUV (according to many in the automotive industry). 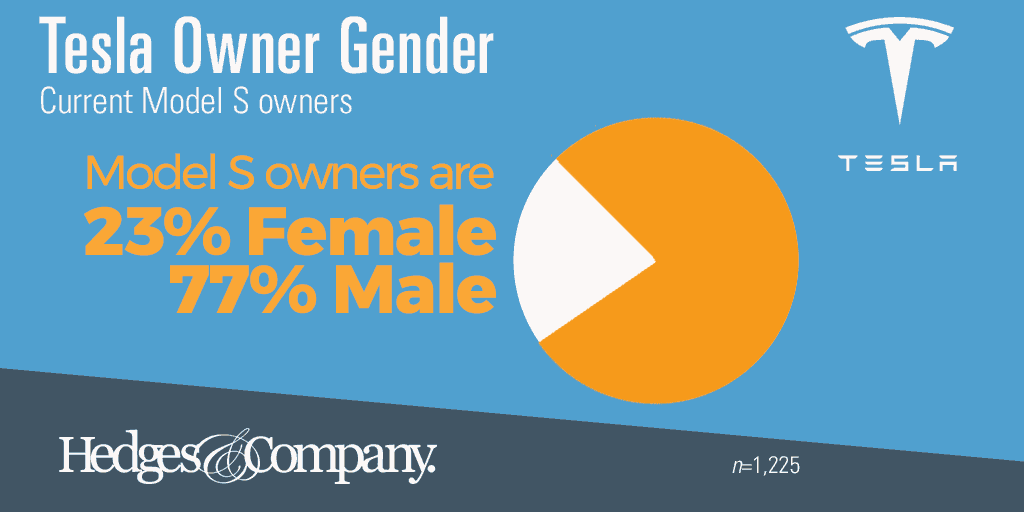 The Tesla Model S, a four-door sedan, tends to have more male ownership than the Model X. Males own 77% of Model S vehicles and women own 23%.

Our numbers are based on a universe of 253 Tesla Model X owners and 1,225 Tesla Model S owners. We’re very curious when more Model 3 data becomes available, how that gender breakdown looks.

There’s a comparison of male/female ownership of Tesla along with popular SUVs and CUVs over at Teslarati. 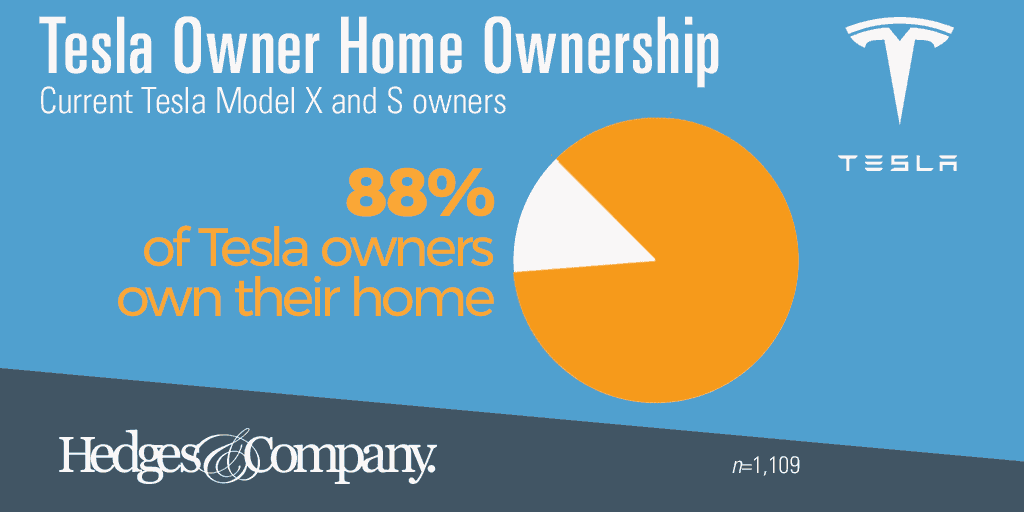 Due to the high household income and older age of Tesla owners, this shouldn’t be too much of a surprise.

As a comparison, the percentage of Americans who own their own home has fluctuated between about 64% to 67% in recent years. That puts Tesla owners a full 21 to 24 points higher for home ownership than the general population.

The median value of a Tesla owner’s home is $348,167. Since many Tesla owners are in areas where real estate values are high (California, for instance), that number is naturally skewed higher. Still, it’s obvious the Tesla owner tends to be well-off.

People interested in buying a Model 3 are younger than other Tesla owners according to Quantcast. Covering in-depth demographics of Tesla Model 3 requires its own article. To learn more about Tesla Model 3 demographics, click here.

Frequently asked questions about this data

What is the most sold Tesla?
The Model 3 is the most popular Tesla model in the United States.

What’s the GVWR for a Tesla Model X?
A 2022 Model X has a GVWR of 6250 lbs. Here’s an article with more information on GVWR classes.

Methodology used in the demographic analysis

This data comes from the master vehicle owner database of 175+ million vehicle owners, including large amounts of consumer-level data, which is overlaid on vehicle records. This gives us a great deal of accuracy when we pull and analyze demographic data, without having survey errors from self-reported data or other types of “sampling errors.” Most of the statistics cited on this analysis have a margin of error of +/-2.5% at a 95% confidence level.

Do you need to reach Tesla owners with a postal mailing list? We can help you with that, just give our office a call or click on this button below to fill out a simple form.

Want more info? Read about the Tesla Cybertruck in our article on the most popular truck in America. We also have an article on Jeep® owner demographics.

We Bust 3 Myths About Selling Auto Parts During the Christmas Shopping Seas...