How many licensed drivers are there in the US?

We pulled data from the Federal Highway Administration (FHWA) and we pulled additional data. We then added our own analysis and projections to answer the question, “how many drivers are in the USA?” and many other related questions.

Note: click for even more automotive aftermarket trends and stats on this page.

What percentage of American adults have a driver’s license

89% of all American adults have a driver’s license. That includes everyone 25 years old and older.

Statistics on number of drivers in the US

The 1980s were much slower in terms of annual growth, with an average of a 1.46% increase in the number of licensed drivers in the US. In the 1990s that continued to drop, to an average annual increase of 1.24%.

2012 was the first year with a decline in licensed drivers in the US from the previous year.

We don’t yet know the full impact of coronavirus on licensing of new drivers. Miles driven was down in 2020 and that has a negative impact. On the other hand, in 2021 use of public transportation started to return to pre-pandemic levels. We’ll update this as more data comes in.

We looked at how many drivers are in the USA by age. Here is the percentage of Americans with driver’s licenses compared to the total population, with population estimates from the Bureau of the Census.

Across all age groups, 84.1% of all Americans have a driver’s license.

The lowest percentage of total licensed drivers is among 16- to 19-year-olds, where just 34.8% of the population has a driver’s license.

Statistics are based on 2019 population estimates.

Percentage of adults without a driver’s license

How many people drive in the US?

It is hard to determine exactly how many people drive in the US. On one hand, some people without a driver’s license drive illegally. On the other hand, some people with a valid license don’t drive and have a license for identification purposes, or they just prefer to not drive. Some people may choose to not drive due to health reasons.  It’s probably safe to assume that between 235 million and 240 million Americans drive.

Driver’s licenses by men and women 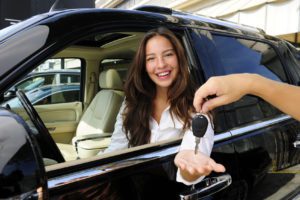 Number of drivers in the world

If you need to know how many Uber drivers there are, Uber claims 5 million worldwide as of the 4th quarter of 2020. Drivers are in 69 countries. That’s up from 2018 when Uber said there were 3 million Uber drivers around the world, in 65 countries.

How many Lyft drivers in the USA?

How many CDL drivers in the USA?

Sources for this article, including number of licensed drivers, are the US Census Bureau, the Federal Highway Administration and Department of Transportation, with additional analysis by Hedges & Company.