The 2022 SEMA Show is scheduled for Nov. 1-4, 2022 and if you’re wondering how big is SEMA, we’ll attempt to show you the scale and square footage.

The new West Hall, across Paradise Avenue (shown here in blue), brings on over 1 million square feet of new available exhibit space to the SEMA Show.

Table of Contents hide
The new West Hall
What is SEMA?
How big is SEMA in Vegas?
How long is the SEMA Show?
Get more SEMA Show information
SEMA Show coincides with AAPEX

The number of SEMA Show attendees for 2022 is somewhat of an unknown projection right now, but have a lot of historical data to rely on.

CLICK TO ENLARGE: How big is SEMA? With the addition of the new West Hall it’s a lot larger! The West hall has over 1 million sq ft of new available exhibit space.

We can also show how big the show is in terms of square feet (now over 2 million square feet of available exhibit space).

And, for fun, let’s compare it to the Empire State Building!

The SEMA Show is the aftermarket industry’s annual trade show in Las Vegas at the massive Las Vegas Convention Center (LVCC). It’s hard to describe if you haven’t attended. The show is produced by the Specialty Equipment Market Association. 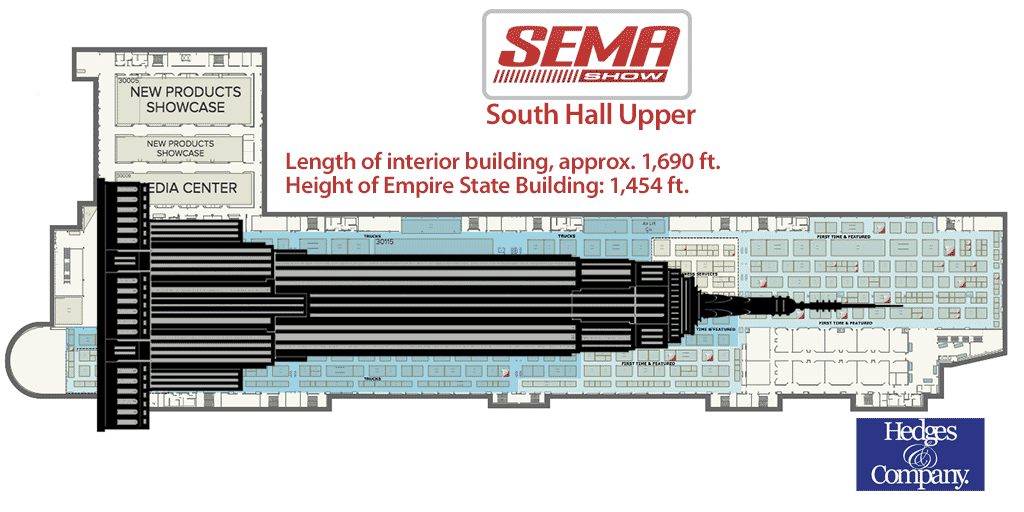 It’s a four-day aftermarket industry trade show and event that historically brings in over 160,000 attendees, including more than 70,000 buyers from the industry. Attendees come from all over the U.S. and 140 countries. They come to see more than 2,400 exhibiting companies.

One of the interesting statistics is the length of one of the exhibit halls, the Upper South Hall where you find tools & equipment and collision, repair and refinishing products. That’s only one of several halls that contain the massive SEMA Show.

How big is SEMA in Vegas? 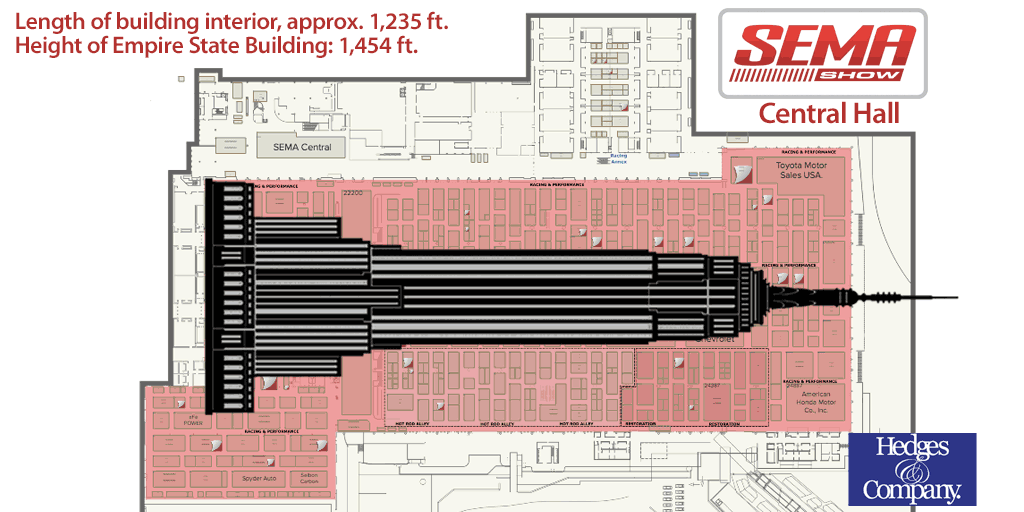 The 2022 show will include the new West Hall expansion, bringing another 1.4 million square feet of available exhibit space. The other halls combine for over 2 million net square feet of available exhibit space. There are 1,500 feature vehicles scheduled and over 3,000 products featured in the SEMA Show New Products Showcase, located in the Skybridge between the Central Hall and South Hall.

The historical size of the SEMA Show, by the numbers:

Hopefully the pandemic is behind us, travel returns to normal and the 2022 show will be just a big as it has been historically.

How long is the SEMA Show?

The SEMA Show is a 4-day show, Tuesday through Friday. There is an education day with various seminars and meetings on Monday.

We hope to see you in Las Vegas in 2022. If you’re discussing the show on social media, use the hashtag #SEMA2022.

Confused about how to get into SEMA? Just follow that link.

And of course if you’re attending the AAPEX Show at the Sands Convention Center use the hashtag #AAPEX22 on social media. The AAPEX Show is November 1-3, 2022 and is co-owned by The AutoCare Association and AASA.