We took registration data for new 2014 Chevrolet Camaros, Ford Mustangs and Dodge Challengers and pitted these late model muscle cars head-to-head for our first Big Data Shootout. We wanted to see which car had the most total registrations, as well as the biggest increase or decrease from last year. We analyzed year-to-date registrations through May 2014 and compared them to May 2013. Racers, start your Big Data engines!

This third generation model has been out since the 2008 model year. Maybe the new 2015 Challenger with its 6.4L V8 engine, bumped to 485 horsepower coupled to an 8-speed automatic will rev up sales through the rest of the year. And of course there’s the new SRT Hellcat with a supercharged 6.2L hemi engine that can produce 707 hp and 650 lb·ft of torque.

In second place was the Ford Mustang, with a 7% increase in new vehicle registrations through May. The Mustang has a disadvantage in our shootout because the new 2015 sixth generation Mustang, codenamed S550, started production in July 2014 so our data does not include any of these new vehicles. This new Mustang will have three engines: the all-aluminum 3.7L “Cyclone” V6 (300 hp), a 2.3L EcoBoost turbocharged/direct injected inline 4 cylinder (310 hp), and 5.0L “Coyote” V8 (435 hp and 400 lb-ft. of torque).

The Mustang also came in second in terms of total registrations, with 3.9% fewer registrations than our first place winner, which you probably guessed is the… 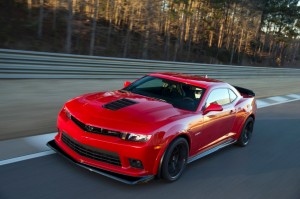 Chevrolet Camaro: the winner of our first Big Data Shootout

We’ll be anxious to see how the rest of the year shakes out once the new 2015 Ford Mustang starts showing up in the new vehicle registration database. Can the Camaro continue to stay at Number One?

Everything You Need to Know About Vehicles in Operation (VIO)