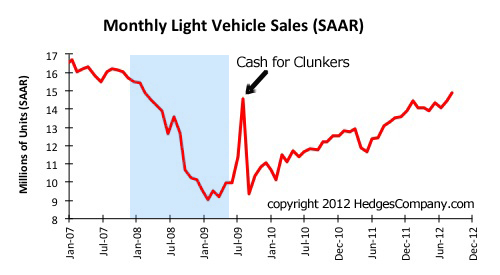 Monthly automobile and light truck sales, millions of units at a seasonally adjusted annual rate (SAAR). The Great Recession, December 2007-June 2009 is shaded in blue. The Car Allowance Rebate System (CARS), better known as “Cash for Clunkers” produced a prominent spike in August 2009 (CARS officially ran from July 1 to August 24, 2009). The auto industry measures sales with SAAR, so for example if a month had a SAAR of 13 million, the auto industry was on pace that month to sell 13 million vehicles for the entire year.

With monthly auto sales rising here are reasons for the continuing increase in automobile and light truck sales in the face of a weak economy.

The auto industry tracks monthly unit sales as a seasonally adjusted annual rate (SAAR) figure, which has been steadily rising since the summer of 2009.

Monthly auto sales in September 2012 hit 14.9 million units, the highest level in over four years. And it could have been even higher because September was soft for fleet sales, meaning the September surge was primarily based on consumer demand (which in itself is a good economic sign, and a reason total September retail sales reported by the government were up 1.1%, exceeding forecasts).

In the chart at the left you can see SAAR by month with the Great Recession indicated in light blue, from December 2007 to June 2008.

Many variables “drive” auto sales (pun intended). One notable spike in the SAAR chart at the left was Cash for Clunkers in the summer of 2009. Other obvious things are incentives and pricing. One factor contributing to automobile sales is the need to replace older cars; the average age of a registered vehicle in the US has risen to nearly 11 years. But there’s more going on with automobile sales than just replacing older vehicles. 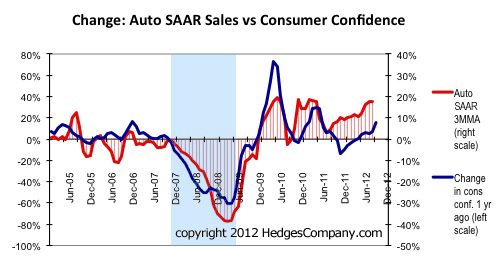 The change in SAAR unit sales from one year ago, compared to the change in consumer confidence one year ago. The graph uses a moving average to smooth out month-to-month variations. The Great Recession, December 2007-June 2009, is shaded in light blue.

Automobile sales and consumer confidence go hand-in-hand. Incentives are great, but if consumers don’t feel good about the economy and their future they won’t commit to spending money on a new car.

For all the talk about how bad the economy is—and it is—consumers seem to feel it is slowly improving from where it was one year ago and one thing they’re doing as a result is heading to the dealership.

Thanks for following our “66 Trends in 66 Days” blog series and check back in the next few months as we update statistics and market trends on retail sales of auto parts, the SEMA Consumer Demand Index, and more! In the meantime we’ll be in Las Vegas at the SEMA Show and AAPEX, look us up!