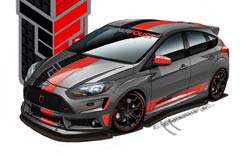 The SEMA Show draws all kinds of different entities of the automotive sector, and with them they bring the best products, parts, facts and research they have. Perhaps the largest attractions at the show, however, are the custom vehicles. Here is a look at what some of the most talked about vehicles that will be at this year’s show.

Ford plans to unveil at least 20 vehicles at the 2012 SEMA show. Of the vehicles to be shown, the showcase will feature various Focus and Fusion models built by various motorsports groups such as Bojix Design, Tanner Foust Racing, and more.

Chrysler will be debuting 24 Mopar-modified vehicles to mark the 75th anniversary of Mopar parts and accessories. Of the 24, the SRT Viper and the Jeep Wrangler Sand Trooper will be the most likely to turn heads. The bright yellow SRT Viper with a black interior has a carbon-fiber-and-aluminum engine cover over the 10-cylinder 8.4L engine. The monstrous Jeep Wrangler Sand Trooper wears 42-inch Super Swamper Bogger tires and keeps a 5.7-liter Hemi V8 engine under the hood.

Chevrolet has been relatively quiet about what they plan to showcase at the SEMA Show. Recently, though, they have announced that they will showcase 39 vehicles, 23 of which will be small cars. According to the Detroit Free Press, some of the vehicles at the show will include the Chevrolet Spark Sinister concept, which is a more aggressive version of the vehicle that ties in with the night-racing crowds of industrial districts in big cities. Chevy will also showcase two Spark designs geared toward women, “The Color Run” and the “Pink Out Cancer Awareness” concepts.

Lexus will debut the LFA Nurburgring Edition at the SEMA Show. This vehicle is a high performance version of the Lexus LFA with drivetrain and external modifications that allowed it to set the record time of 7:14.64 for production models at the Nurburgring Nordschleife course. The record has since been broken by the 2010 Dodge Viper SRT10 ACR with a time of 7:12.13. Only 50 of these LFA Nurburgring Editions will be built and one will be at the 2012 SEMA Show!

Stop back in tomorrow for a look at The Top 5 Most Sold Vehicles of 2012.