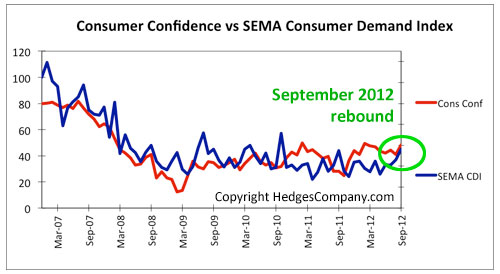 We like to track CDI (blue line, left scale) against Consumer Confidence (red line, right scale) since they track closely to each other. It’s also a unique combination of intent to buy (the SEMA CDI) and how consumers feel. This is important because Consumer Confidence doesn’t necessarily mirror retail sales so the combination with the CDI gives a better view on economic conditions.

The index is set to an initial value of 100 in January 2007, when our chart begins.The SEMA CDI has been improving from 2011 through most of 2012. It hit the lowest point of 2012 in May when it was at 26. Nationwide, consumer confidence has been moving up since June.

The Consumer Demand Index (CDI) is a measure of purchase intentions for automotive consumers over the next three months. Note: If you’re looking this up online, consumer confidence is sometimes mixed up with the Consumer Sentiment Index compiled by the University of Michigan Institute for Social Research. They’re actually two different indices but both provide good feedback on how consumers view the future.

Tomorrow: Trend 28 and four predictions about Google and the automotive aftermarket.