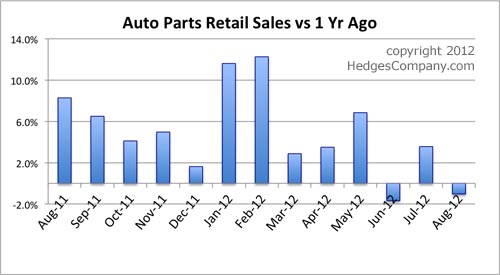 Today’s trend is a little concerning: the growth in auto parts sales is slowing down compared to the first half of 2012. This is important to watch as you plan your company’s automotive aftermarket forecast for 2013.

Retail sales of auto parts went negative for the second time this year. August 2012 showed a slight drop from 2011, following a decent July (up about 3.5%) and a slight drop in June. We’re holding to our forecast that the year will come in between 3% and 4% over 2011 but we’ll be watching economic signs closely for any changes over the next few months.

So what is causing the drop in sales? There are a few important factors at play. For one, 2011 is a tough act to follow. August and June 2011 were, respectively, the largest and third largest sales months on record. Ever. The second biggest month on record was this August – so it’s not as though retail sales are tanking. We posted 11 days ago that the first half of 2012 was up about 5.4% over 2011. To put 2011 in perspective it showed the biggest sales increase in over ten years.

levels in a long time, but remember we’re looking at August, when consumers were not quite as optimistic as they were in September.

Economic factors in our favor through the end of the year include personal income* which is showing a slow but steady improvement and home prices which are showing recent signs of a rebound. Those two economic indicators historically track well with auto parts sales. More good news: the government’s advanced estimate for all retail sales shows seasonally adjusted September sales up 1.1% over August, with non-adjusted sales up 3% from September 2011 thanks in part to strong automobile sales.

One economic factor not at play: the price of gas. Remember, we’re looking at August and back then, gas prices had not yet spiked like we’ve seen in certain parts of the country in recent weeks. In fact, the increase in gas prices from a year ago, using a rolling average, was the lowest since 2010. (Gas prices don’t have the affect on parts sales like you may think – we may cover that surprising fact in a future blog post.)

Bottom line: don’t let this slowdown in retail sales ruin your excitement for the upcoming SEMA Show, it looks more like a bump in the road. Check back for more updates in the coming months as we continue to track the economy.

Grow Sales With New Products From the SEMA Show